October 4th – For the first ride this month we did an old favourite – the canal and trail ride to Manchester and back. The last time we did this ride we stopped for lunch in Piccadilly gardens and came out of the café to find Chris’s bike had been stolen. We walked with Chris to the bus station and then made our way back to the canal and home as fast as could, even so, it was going dark by the time we got back to Rochdale and, having had 8 punctures between us, it wasn’t the best day we’d ever had. 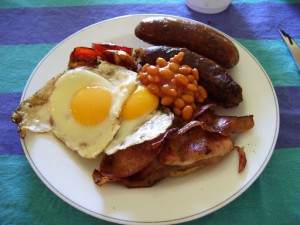 A great way to start the day. 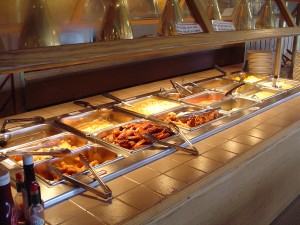 With this in mind, we decided to meet a bit earlier and have an ‘all you can eat breakfast’ at the Sandbrook before setting off. With full bellies, we made good time down the canal to the outskirts of Manchester where, as usual, the towpaths are either blocked or diverted making it more difficult to follow the canal. We eventually made our way across Manchester towards the start of the Irwell Valley Trail and, having stopped for coffee and doughnuts on the way, headed north towards home. The trail isn’t very straightforward at that end but Dave knew the way and we only had minor problems find our way. As we approached Philips park Dave took us up to the start of one of the mountain bike trails which we all did without mishap. (Quite an achievement seeing as I’d come a cropper on the canal!). From there we followed the trail up to Bury and the along the road to Bamford, going past the Crimble to Heywood and past Castlehawk Golf club to the canal at Castleton and then home.
Total distance 43 miles. 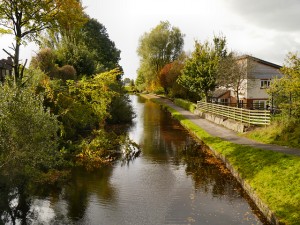 The Sandbrook on the canal bank at Rochdale. 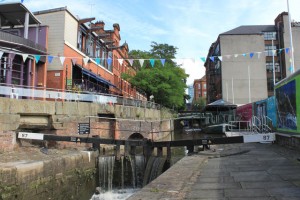 The canal in Manchester ( Canal Street)

October 11th – ‘The Season of Mists and Mellow Fruitfulness’ Audax is run from Mytholmroyd, the longer one being 100k and the shorter one 50k. We usually do the shorter one, but, riding to the start and back makes it a challenging ride. From Mytholmroyd the route goes through Heptonstall, Blackshaw Head, Knowl Top, (the first control was the name of the last cottage) and over the Long Causeway, going to JJ’S café for the second control. From there, the next control is at Hurstwood. The clue for this control was ‘name of house number 33’. After a bit of head scratching, the lady of the house came out to tell us that the house didn’t have a name now but it used to be called ‘Moorside’ – problem solved! Going through the picturesque village of Worsthorne and on to Caldwell Activity Centre for the next control and tea and cake before tackling the infamous ‘Widdop Climb’. After several hours in the saddle, this climb is brutal, going on for almost  a mile and very steep. From the top of the climb the route is mostly downhill with just  a few rises before reaching the Packhorse Inn. After stopping for a while to re-group, we made our back to Heptonstall, Hebden Bridge and the finish at Mytholmroyd.
Calder Valley Cycling Club, who organise this event provide a superb buffet meal at the finish and we certainly made the most of it.
Whilst most riders packed their bikes away in their cars, we had to ride back to Rochdale via ‘The Cragg’ which made the whole ride 63 miles with 6100 ft of climb. A tough but very enjoyable day. 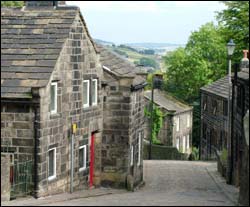 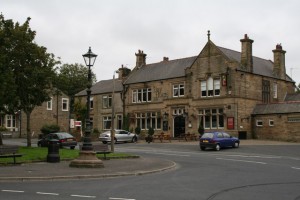 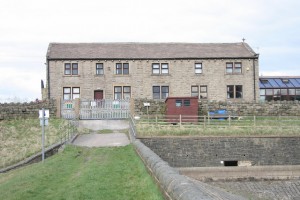 October 18th – A new café stop for us this week – the Dalesman at Gargrave is a well known cyclist’s café but we hadn’t been before so this was a new ride for us.
Going through Whitworth, Bacup, Padiham, Barrowford and Barnoldswick to reach the café and then back through Earby, Colne, Nelson and Burnley giving a total distance of 73 miles with 5100 ft of climb. Decent weather and some great back roads made this a route we’re sure to add to our list of regulars. 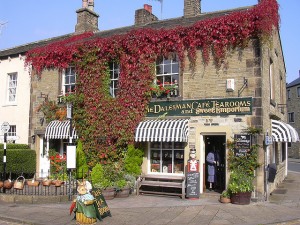 October 25th – The ride to the café at Whalley Abbey, situated in the grounds of the Abbey, used to be one of our regular rides until the closure of the café a couple of years ago. Now, with its’ re-opening, it’s back on the agenda again
Going via Whitworth, Newline, Waterfoot, Crown Point and Padiham to Whalley and returning via Painter Wood, Haslingden Moor and Rawtenstall. Total distance 55 miles.Fill your prescription online: Why Are Prescription Drug Prices Rising 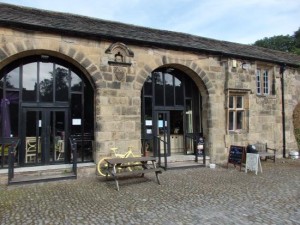 The ruins of the 13th century Abbey