August 2nd – The first weekend in August and it wasn’t raining although it looked like it might at any minute!
We had planned a ride to Holmfirth for lunch and, for once, we were able to complete the whole ride without getting wet.
From the Range, we went through Milnrow, Newhey, Saddleworth and over the Isle of Skye road to Holmfirth.
From there we returned to Rochdale via Netherthong, Meltham, Delph, Denshaw and over the hill to Newhey.
Total distance 50 miles but with 5000 ft of climb this was not an easy ride! 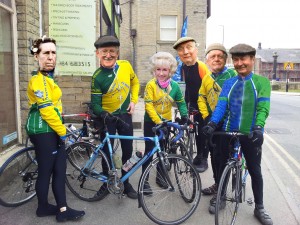 Not the usual turnout!

August 9th – Another dry day saw us head through Hebden Bridge and over Cock Hill to Howarth for lunch. The climb up the cobbled main street featured recently in the ‘Tour de Yorkshire’ and is a lot steeper than it looks in the picture.

After lunch we had a choice of routes but decided to return over Cock Hill to Hebden Bridge and from there some went up the ‘Cragg’ and the others back down the valley.
Total distance 50 miles.

With the distance involved this week, we started at 8.00 am on a sunny, if chilly, morning. Going through Rawtenstall, Haslingden, over Blackburn Moor to Ribchester, Longridge and on to Waddington for lunch. From there we went through Bolton by Bowland, Hellifield, Otterburn, Bell Husk, Gargrave, Thornton in Craven, Earby, Foulridge as far as Colne where we stopped for a much needed cup of tea and then made our way back to the Range. 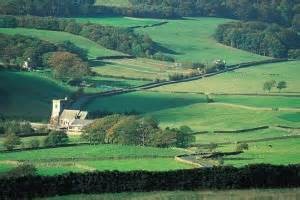 Forest of Bowland looking from below Waddington Fell. 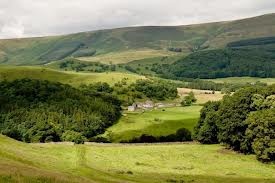 A long day, and with 6000 ft of climb, a very tiring one, but a fantastic day out. Being on roads new to us for much of the day, we were pleasantly surprised by some of the amazing scenery, particularly from Longridge, through Waddington and into the Yorkshire Dales National Park.
A day to remember.

August 23rd – After a very hard ride last week we had a much easier, but just as enjoyable, shorter ride this Sunday.
The ‘Preston Guild Wheel’ is a circular route around the outskirts of Preston and is completely traffic free. Mainly on tarmac but with a few rougher bits, it can be done on foot or by bike and is 21 miles long. Obviously, we chose bikes which included mountain bikes, hybrids, road bikes and even a folding bike and an ‘E’ bike. 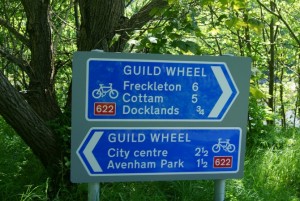 The route is very well signposted.

We chose to go in a clockwise direction following the Ribble estuary for a while before heading inland and stopping at the ‘Final Whistle’ café for lunch by the side of the Lancaster canal. 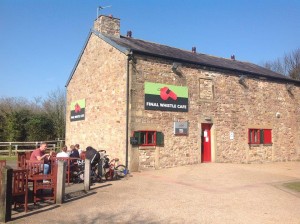 The ‘Final Whistle’ café with Lancaster canal on one side and UCLAN Sports Arena on the other. The sports arena is the home ground of Preston Ladies football team which is presumably why the ‘Final Whistle’ is so named. 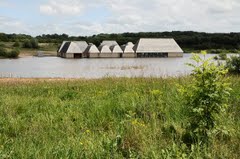 With another stop for tea and cake at Brockholes Nature Reserve and good weather all day this was the easiest ride of the year so far but made a very pleasant change from the usual ride.

August 30th – No great detail about this ride because I was away at the time but it was roughly – Owd Betts, Ramsbottom and part of ‘Eric’s Epic’ with lunch at Tockholes.
Described by Eric H as ‘ a hilly 52 mile ride’.Should we take generic or branded medicaments